Green has become my new favorite color.
It all started with this discount vase.  I love it.  I bought it.
It matched nothing I owned (at the time.) 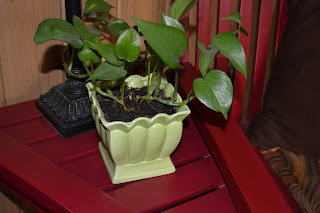 I say nothing.  Most of my house is done in a mossy gray/green.
Nothing bright and potentially limey.

Next I found this pear, also discounted for my new bookshelves. 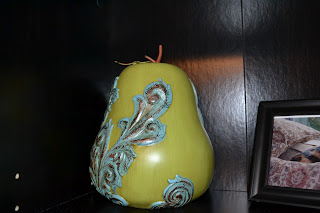 Well, it looked funny all alone.  I added a pair of fleur de lis book ends.
They were originally black, but the Ivy Green Krylon came in handy.
After the book ends was this neat little wooden bird.
I love birds. 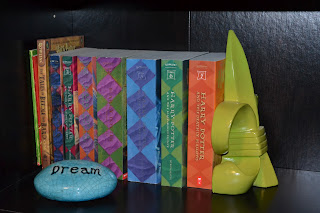 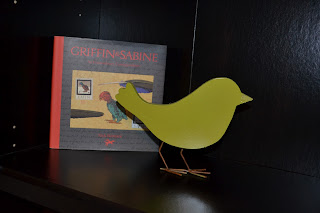 After finishing my library, I needed a chair.
After many, MANY internet searches, price checks, and phone calls,
I got one.
It is the most comfortable chair I've ever sat in.
It needed pillows.  Enter my green...again.
This time, they were napkins from Target repurposed into pillows.
The table square is a table cloth, also Target, that yielded
enough fabric for a square and to recover my desk chair.
Ahhh, green. 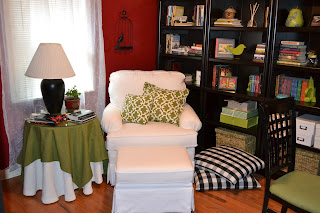 Now the real reason for this post.
Meet my new friend. 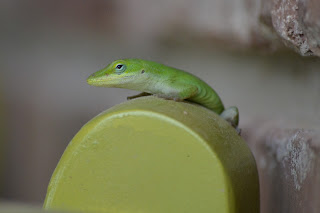 He's been hanging out on my (also ivy green) patio furniture.
He's tiny, tiny, tiny - about 3 inches long and maybe
as big around as a pencil at the largest part of his body.
My better half says my cat will eat him and
that I should catch him (as if I could) and put him on a tree in the woods.
I think I'm going to let him live dangerously.
Currently, we play "I Spy" where he hids and I try to find him.
(It doesn't take much to entertain me!)﻿

It's been a wild and wooly summer. 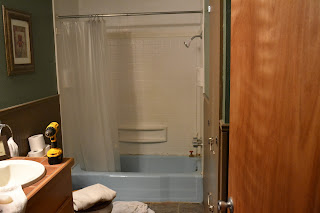 Before.  Gone is the 1960s blue bathtub and groody wall-board
that even straight bleach wouldn't clean. 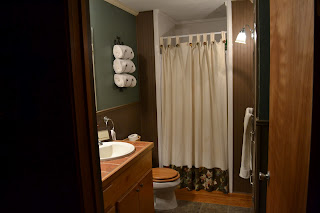 After.  Added a built-in cultured marble shower, a new sconce, bit of new flooring,
and rearranged some accessories and voila, a new bathroom!
Finally, our home has been 100% renovated!

Some projects have been fruitful, like our neighbor's garden. 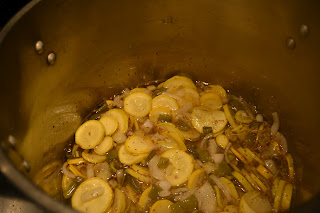 Squash pickles, in progress.  I also made 6 batches of
bread 'n' butter pickles, which amounts to about 24 quarts.  I had my
assembly line going too fast to document them on film.  I also made
several loaves of zucchini carrot bread and put up enough
zucchini to keep us in bread and other zucchini goodness
throughout the zombie apocalypse.

I worked on my own outdoors/garden throughout this project-based summer: 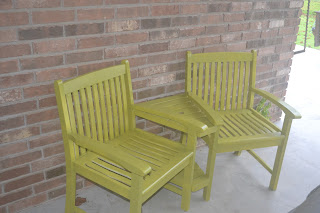 ﻿This seating was once barn red (not to be confused with the identical
red seating still in my living room per previous post...it was a sweet deal that
ended up being a bogo!)  Thanks to pinterest, my new obsession, I learned
about spray-paint primer and adopted a new favorite color, ivy green. 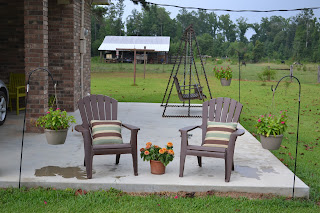 I added to the patio with some wonderfully comfortable adirondack chairs
with pillows (!), hanging verbena and a zinna.  I like to sit here in the evenings
with my cat and have "meow time" although she turns her
nose up at the chairs and prefers to lounge solo in the swing. 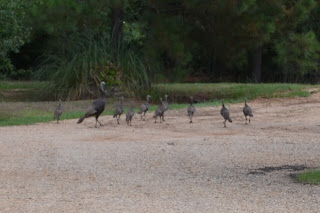 This was my view this afternoon.  We have two large hens (one not pictured) and between
8 and 9 "chicks" if you could call the youngsters that.  I'm not certain
of the terminology to use with turkeys, but I am certainly enjoying
their presence.  They've been around in our yard and our neighbors yard
all day.  We don't turkey hunt, so this is somewhat of a sanctuary for them.
We've had as many as 18 chicks in years past.  I love watching them comb
the grass for seeds and bugs.

Last but not least, 4th of July!
Happy Independence Day! 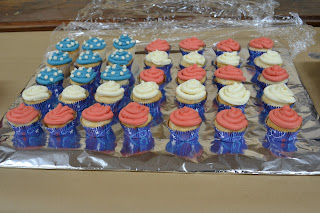 We finished our bathroom about 11:45 Monday night...literally.  I was gone to
an inservice workshop all day Tuesday and knowing I had to feed upwards
of 20 people on Wednesday was somewhat overwhelming.  However,
I did manage to pull a bit of patriotism out of my exhausted hat.  The
cupcakes were delicious and the left-overs are gracing my freezer shelves.
The piping bag made my hand cramp (I don't know how professional
bakers do it all day), but just being creative, as simple as this was, was
more therapudic than anything I've done in a while.  That tells me I need
to sharpen my writing pencils and gesso some canvas for some
creativity intervention.  But, who has time! 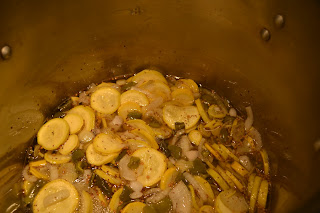 My awesome neighbor always plants﻿ WAY too many
veggies.  This morning, I was able to harvest enough squash,
bell pepper, and onions to make three batches of squash pickles.
Sad/Great thing is, I still didn't get everything!
These pickles are sweet, tangy, and my favorite thing to eat
with Sloppy Joes (when I could still eat Sloppy Joes.)

I also ended up with zucchini, which I turned into carrot & zucchini
bars with lemon cream-cheese frosting.  Nom Nom Nom!!!

The cucumbers are getting there.  Got about half as many as I needed
to begin my bread-n-butter odyssey.  I'll have more than I want
by this time next week!

There is no doubt about it.  The garden is in!
Posted by Unknown at 7:50 PM No comments: 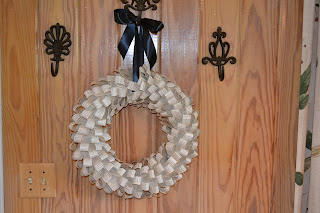 No, it was not a misprint.  Spring Break Project #1 is not yet complete.
Discarded books are awesome!  I "borrowed" this idea from Razzle Dazzle Crafting
link here:  http://razzledazzlecrafting.blogspot.com/2009/11/crafty-christmas-wreath.html
but I used an old library book, circa 1955, instead of scrapbooking paper.
I'm not having much luck loading pix this morning, but their blog shows exactly what I did.  I cut apart a book, cut strips of the pages, stapled them together, then hot-glued around a wreath form.  It was lovely! One of the best parts was reading the strips as I stapled and glued.  It would be a great writing exercise to make up a story using 5 or 7 of the words found on the strip.
Must remember that for writing group next year!
Posted by Unknown at 9:26 AM No comments:

I dream of painting and then I paint my dream... - Van Gogh.
I have dreamed of this room for years.  All my life I have wanted a home library/office.  The office part, I had.  The library, not so much.  This three day weekend, my dreams finally came to fruition.  After many hours of inhaling paint fumes (no, it didn't make me feel anything except headachey), numerous cuts and bruises, the loss of two acrylic nails, and sore muscles from contorting to paint and/or construct the book shelves, my room is complete.
Here are the "before" shots: 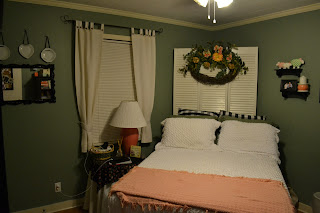 This is the view from the door.  I love my headboard, hated the bed.
The walls were painted "Shade Tree" green - love the color.
It's currently in my bathroom and kitchen. 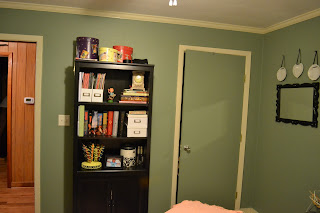 This is my closet and first bookcase. 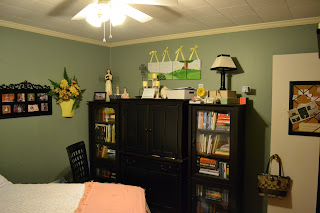 This is my computer armoir and two bookcases.
And, now, the after: 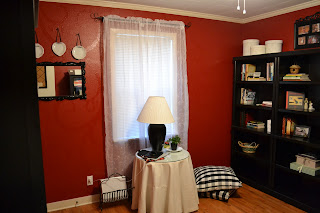 The corner where my bed was! My last item to add is a chair and ottoman,
white, of course, to place where those checked pillows are on the floor.
Once I get a chair that's comfy, I may never leave the room! 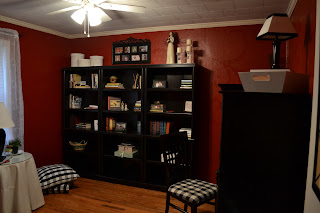 My three new bookcases.  I need some great bookends...and, of course,
MORE BOOKS!  BTW, the bottom shelves are empty.  I'm looking for
some decorative boxes or baskets to use for extra storage. 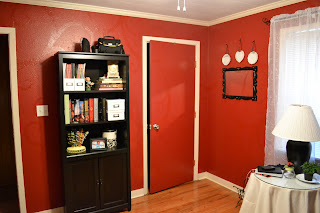 Closet area, after.  I did paint the lamp on the table - black satin spray paint. 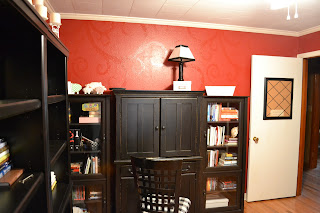 Desk area.  I have a new canvas planned for above the desk - a black
on white of a fabulous quote by Marilyn Monroe.  Maybe this weekend?
How to:
I started out with two coats of red paint.  Before you ask, the trim was white (and taped off)
and the hardwood floor was already there.  I chose "To Die For Red" - a Wal-Mart
color, but I had Sherwin Williams match the color as I like their paint better
and had a 25% off coupon!  A gallon of flat paint was needed (I ended up with a matte
satin, due to my color choice) and a quart of high gloss in the same color.
Then: 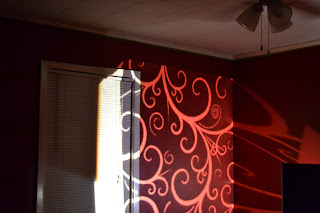 I used a transparency and overhead projector to pencil the design on the wall.
I ended up using a white colored pencil.  I could see it against the red and
knew the paint would cover the lines. 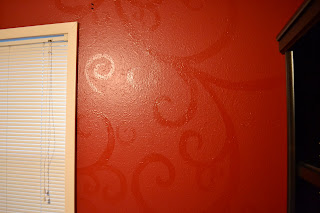 I painted the design with the high gloss, let it dry, then, rearranged my room!
I can't take credit for the idea.  I found it on pinterest and traced it back to this website:
http://www.sawdustandembryos.com/2010/07/our-kitchen-reveal.html
There is the entire how-to, including the swirly design.  I used their design because
I couldn't find another I liked better.  You could do stripes, diamonds, any pattern you wanted
to paint.  I will admit to cheating.  I knew where my furniture would go, so I just painted the
"tops" of the walls and the sides that would be seen.  If I hadn't, I'd still be painting!
It was a long, labor intensive project, but well worth my effort.
BTW, all the furniture came from Wal-Mart except the computer
desk that was a hand-me-down from my parents - thanks, Mom & Dad.
I need a few more accessories and lots and lots more books.  But, I finally have my library!
Posted by Unknown at 7:33 PM 1 comment: