It's been a day.  Already.  And it's just 7:45 a.m.
After my hubby left for work, I decided to water my plants.
It's a "cool" 76 degrees and will only get warmer as the day progresses.
I ended with my hibiscus, which takes over a gallon of water a day.

Sitting on the arm of my Adirondack chair was this precious thing: 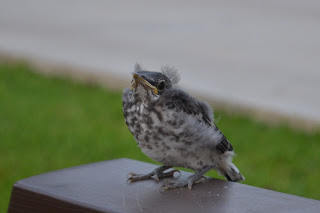 A baby mockingbird.  I love mockingbirds.
They nest here every year.
I love to hear them sing and I try to count the different calls they make.
I particularly love the tufted feathers above his eyes.

I slowly watered my hibiscus (right next to the chair.)
And turned to find my other precious, my cat, in the swing.
She's rarely out this early, but this morning, she is.
I got her fresh food, water, and kitty treats.  I knew it was in vain.

Then the momma & daddy mockingbirds spotted her.
The cacophony began.
Meanwhile, in the pasture our rooster was exerting his vocal skills.
My hubby brought home a new rooster yesterday (safely ensconsed in the coop.)

Our existing rooster was putting on a performance fit for Cirque.
He pranced, strutted, fluffed, climbed, fluttered, jumped.
All while crowing at the top of his lungs.
(Keep in mind he's been crowing since about 5:45 a.m. already.)

During this show, the dogs began to bark.
These are the two who NEVER bark (unlike the one who does just because he's breathing.)
I went to investigate.
Nothing amiss, but the distant barking of another animal, probably a coyote.

Mockingbirds chirping and screeching and now dive-bombing the cat.
A rooster trying to show everyone He's the boss.
Dogs letting me know something is out there that shouldn't be.
And a cat, lazily strolling around the yard sniffing for baby birds.  Sigh.

I lure her into the house with a peck on a glass bowl.
(That's the universal call that mommy has a treat.)
She turned her nose up at 2% milk.
Poured that out and replaced it with heavy cream.
That got a lick, then a distainfully flicked tail.

She began to roam the house.
I was envisioning ragged threads hanging from my new chairs.
She has a penchant for clawing the furniture.  Most is kitty-proof.
I tied string of paracord around a kitchen chair.
This entertained her for quite some time. 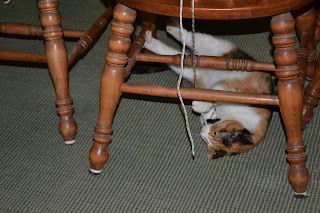 ﻿The roaming began again.  The birds had calmed.
It was time for her to go back outside.
I have things to do that don't involve herding a cat all day.
And, the chase was on.

She knows the exact spots in the house where I can't reach her.
Well, by the time I get to all fours and stretch, she jumps just out of reach.
And runs again.  Under and behind chairs and tables.
Then she hides.  This is her hiding under our bed: 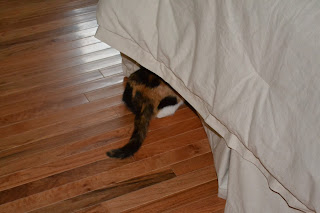 She hasn't figured out her tail gives her away.
After about the 6th circut through the house, she began to eye the new chairs.
I knew what that look meant.  Just a glance and a flicked tail.
It was just a matter of time.

I finally caught her mid-route.
I received a healthy hiss, but no claws.
She's outside, currently "sleeping" on the front steps.
(Do I need to say she NEVER sleeps there?)

The birds are watching carefully.
If they'd pipe down and just eye her, she may go away.
I haven't seen the baby bird (nor the carnage.)
I hope he got away.

My mother once told me something her mother told her.
If every baby bird that hatched lived, we'd be overrun with birds.
I think of that saying often.  It's true.  In a way, it's comforting.
It doesn't stop me from trying to save the ones I can.

I'll close with my favorite line from one of my favorite books.
Harper Lee is a genius and To Kill A Mockingbird should be required reading.
Miss Maudie was explaining to Scout a comment Atticus made to Jem about
being responsible with his gun and how it was a sin to kill a mockingbird.